A short video encouraging young people to stay safe on the roads has been produced by young people on a Norfolk Fire & Rescue Service course.

The King’s Lynn Team members made the five-minute film with support from fire crews from Sandringham and King's Lynn.

College of West Anglia Principal, David Pomfret, said: “We were honoured to be involved in such an important project that not only raises awareness of the all too often tragic consequences of road traffic accidents, but the devastating and life-changing consequences they have upon the families involved and the wider community.

"We hope that watching this will make people think twice and save lives in the future.”

Councillor Margaret Dewsbury, Cabinet member for Communities and Partnerships at Norfolk County Council, said: “ This video has been made by young people for a young audience and we're really proud of the work they put in to this project.

"It shows a road traffic collision and the impact this has on those involved and also features staff carrying out a rescue. A large part of our firefighters’ role is attending road traffic collisions, many of which are entirely avoidable. The service works closely with partner agencies who are all committed to reducing deaths and serious injuries on the roads.”

The video was put together in March but plans to show the film publicly were put on hold due to the Covid-19 pandemic. The video can now be viewed here  https://youtu.be/rfxQxrJwC2k

Charley, one of the Team participants, said: "We really wanted to reach out to young people to raise awareness of the consequences of drink and drug driving through this video. It is vital for us to show the importance on not only the driver, and the potential loss of life, but the devastating impact on the wider community; families, friends, emergency services and the many others involved in tragedy. We hope that by highlighting this, we can raise awareness of these issues and lower the statistics of people dying from accidents involving alcohol or drugs.” 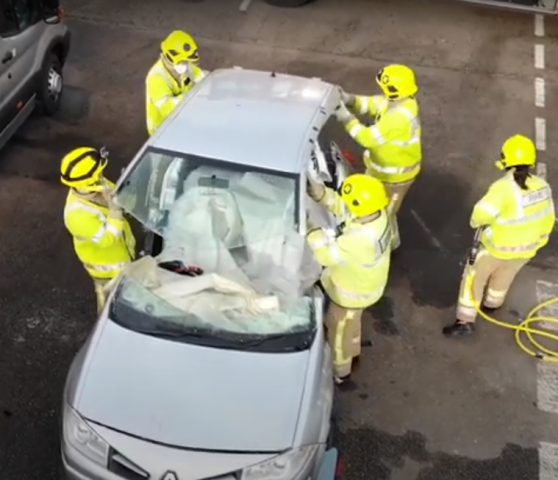 Norfolk Fire & Rescue Service is part of Norfolk’s Road Safety Partnership, committed to promoting road safety and reducing the number of people seriously injured or killed on our roads. The group targets young and learner drivers, who make up only 10% of road users but 33% of those who are injured or killed are younger, inexperienced drivers. We aim to educate the public using the Fatal4 messaging and working on the PCC-led #Impact project, these initiatives develop understanding of risk and consequence alongside influencing positive behaviour change for responsible driving.

The Team programme operates three times a year and runs for 12 weeks. It is free to join and open to 16-25-year-olds not in education, training or employment and does not affect any benefits.

The next courses are in King's Lynn and Norwich and start later this month. There is still time to apply. For more details visit www.norfolk.gov.uk/nfrsyouth