Friends and University Centre West Anglia alumni, Josh Ayres and Alec Payne, 33, will be embarking on a 1,000-mile cycle tour through six countries in memory of Alec’s late mother.

The pair will be setting off from North Pickenham on Tuesday, September 8, before travelling through the Netherlands, Germany, Luxembourg, Belgium and France in the space of 14 days.

They are raising funds for the Swaffham and Litcham Home Hospice who supported Alec’s mother Sharon during her illness.

Sharon, a former nurse at the Queen Elizabeth Hospital and a prominent figure at Swaffham Cricket Club, died at the age of 50 after a long battle with cancer.

Alec and Josh, who met while studying a degree in Computer Science at UcWA, have already well-exceeded their original fundraising target of £2,000 in aid of the hospice. 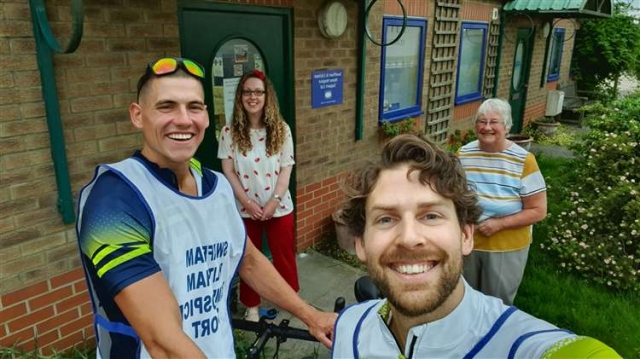 Alec said: “We are quite overwhelmed by the support we have received so far from close family and friends. The idea came from Josh who had been doing quite a lot of biking during lockdown.

“Initially he wanted a new challenge and he met me and suggested this bike idea then I messaged him a week later to say I would do it.”

The friends have a backup plan if coronavirus travel restrictions get in the way of their fundraising challenge.

A Just Giving page has been set up for the cause with a message from Alec stating: “Swaffham and Litcham Home Hospice provides free care to patients who have cancer or terminal illnesses. Sadly, my mother, Sharon, passed away in April of this year after a long battle with cancer.

“The Swaffham and Litcham Home Hospice provided her with incredible care during her illness.

“2020 has seen Covid-19 affect many aspects of all our lives. Many services face uncertainty in these troubled times so we wanted to support the hospice so that they can continue giving invaluable care and support to their patients; just like they did with Sharon.”

Sharon was described as the ‘Mrs Cricket’ of Swaffham due to her dedication to the club which saw her take on a number of roles including child welfare officer, the fixtures secretary and the youth coordinator.

Both of her sons Alec and Jasper play for the club. Sharon had been diagnosed with Mesothelioma in 1998 and cruelly suffered a stroke the week before she passed away.

Josh, who lives in Lynn, said: “I knew a lot about Sharon as Alec used to talk about her to me. When I found out I was completely gutted because we are pretty close friends.”

Pam Tottle, complimentary therapist, who supported Sharon as one of the services provided by the Swaffham and Litcham Home Hospice, said: “I met Sharon when she came to the Home Hospice for reflexology and reiki about five-years-ago.

"Over the years, we grew to trust each other with our most personal thoughts. Although Sharon was in constant pain, her goal was to watch her sons graduate from university. When Sharon put her mind to do something, she succeeded!

"My fondest memory of our sessions together were the big ‘cwtch’s (hugs) at the end. We would just hold each other and get the sense of giving and receiving whatever was needed at that time.

"Sharon was so very proud of her husband and sons bravery and compassion. She managed to stay with us long enough to know her boys were settled in their lives and would succeed in becoming good compassionate men.” 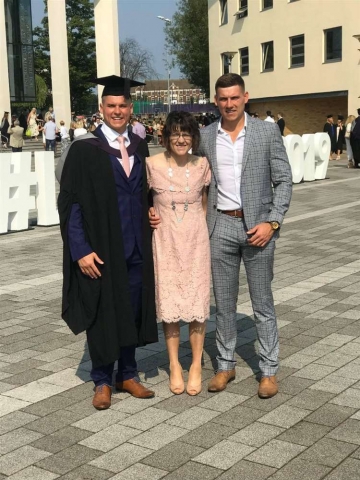 A statement on behalf of the Home Hospice added: “As an organisation it is a privilege to offer the services and support that we do. We enter the lives of those most vulnerable at a most difficult time.

"The bravery, courage and determination of those we support never ceases to amaze us and Sharon was certainly no exception, she was an inspiration to us all.

"We cannot thank both Alec and Josh enough for setting up this fantastic cycling challenge in order to raise much needed funds to help us to continue to provide our free services within the local community, providing practical and emotional support to those who have received a cancer diagnosis.

"The onset of Covid-19 has brought difficulties and challenges to all of us like we have never known before. In these exceptionally uncertain times as an organisation we need fundraising and donations more than ever. Every single penny donated counts.

"We wish Alec and Josh the very best of luck with their adventure and hope that as many people as possible support their amazing effort by way of donation on their Just Giving page.”

The pair are offering a sponsorship for local businesses in which they pay a minimum of £100 in return for the business logo being printed on the cycling tops, as well as a plug on social media.

Their Just Giving page can be found at:  https://www.justgiving.com/team/teamaj